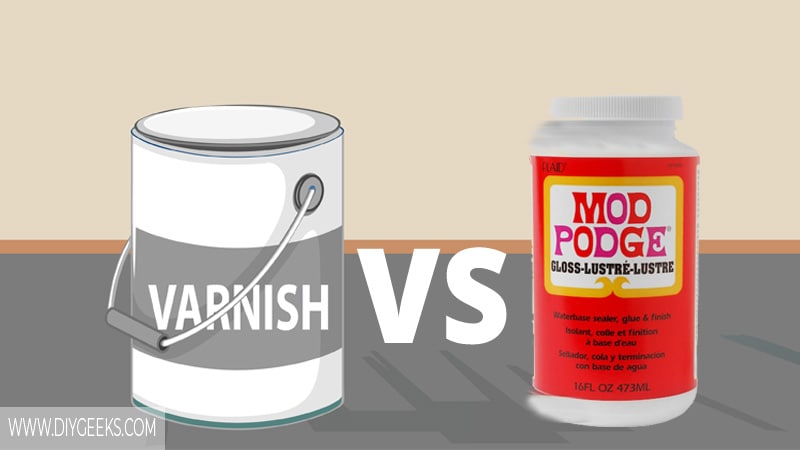 Mod podge by design is a glue formula made to join and fill wood. As such, the product is designed with adhesion as the main concern. Though mod podge can also be used as a sealant, the sealing properties are because of additives in the glue.

Varnish is designed as a sealant and not glue. The main purpose of varnish is to protect the wood or stain underneath. This is why varnish is usually water, scratch, and UV-resistant.

This post reveals more about the differences between mod podge and varnish including tips to help you decide if you need mod podge or varnish for your task. 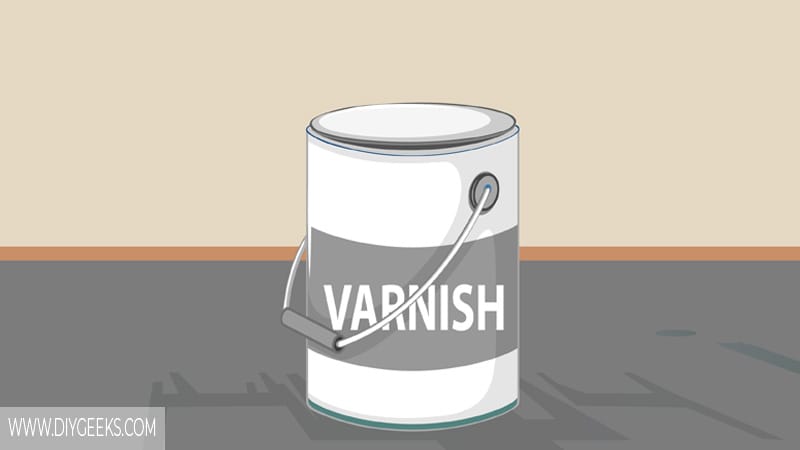 When varnish gets dry, the finish is clear, hard, and moisture-resistant. These features make the varnish a strong sealant as it helps to protect the wood underneath from moisture, scratches, and UV rays.

The hard and moisture-resistant finish makes varnish durable as varnish can last up to 10 years. There are different types of varnish including polyurethane varnish, spirit varnish, exterior varnish, and acrylic varnish.

What Is Varnish Used For?

Now that we know what varnish is used for, let’s find out what mod podge is and what it is used for.

What is Mod Podge? 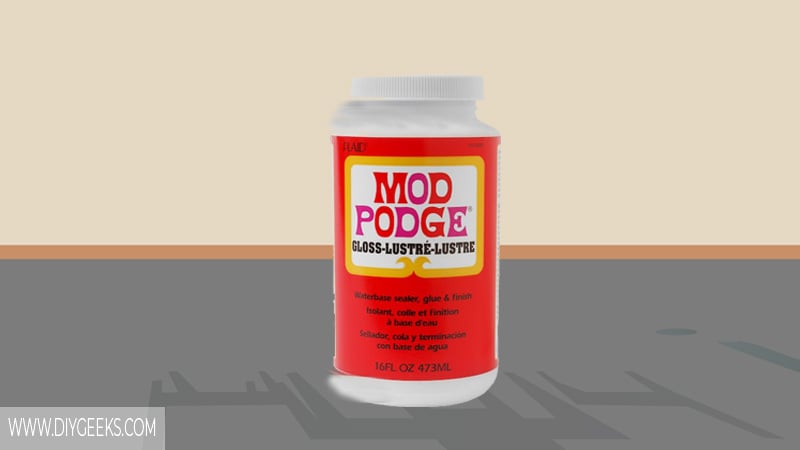 Mod podge is a PVA formulated paste that is used on every art and crafts task for binding and sealing. However, mod podge can be also used for fabric, wood, plaster, plastic, and drywall.

Mod podge when applied forms a whitish paste on the surface, but once this paste dries it reveals a clear coat on the wood. The glue is formulated with high levels of sealants and additives that give the product special features.

For instance, mod podge sometimes has varnish (or spirit varnish) in its formula. This additive makes it possible for the mod podge to also be used as a sealant apart from being a glue.

What Is Mod Podge Used For?

Is Mod Podge a Varnish?

Mod podge is not a varnish or a type of varnish. Mod podge is a glue, binder, or adhesive. However, the glue can be used to cover and seal wood or wood stains. This is possible because mod podge has varnish on its formula. But, the mod podge isn’t a varnish by itself.

Mod podge doesn’t have the features of regular varnish. You can thin regular varnish with paint thinner, but you can’t thin the mod podge paste. If you try to thin mod podge, you will reduce the adhesive qualities and ruin the paste.

Let’s examine in detail the differences between mod podge and varnish.

Here is a table that shows the major differences between mod podge and varnish:

Varnish is gotten from a combination of natural oils like linseed oil with resins, solvents, and driers. Varnish is more natural than artificial as the main ingredients are gotten from tree oils, plants, and other organic matter.

Mod podge has a synthetic formula as the ingredients in mod podge ranges across chemicals to solvents and even varnish. This also means that mod podge has a more compound formula which is a reason the paste is thick.

Verdict: Mod podge has a synthetic formula while varnish has a natural formula.

Varnish is more water-resistant than mod podge. The particles in the varnish dry through oxidization which means varnish becomes more compact and tightly packed while the varnish is drying. The oxidization process goes on until the paint particles are so tight that moisture can’t get in. Varnish when dry also forms a moisture-resistant glossy layer.

The Type Of Finish

Varnish has a rich glossy and hard finish. When dry, varnish reflects light due to the glossy finish and makes the stain color appear more colorful. If you use varnish directly on wood, it will give a natural finish and reveal the wood grain.

Mod podge has a dry and textured finish. When dry, mod podge doesn’t reflect light and reveals a clear coat on the wood.

After a while, the mod podge finish tends to have a white or grey tine, while varnish develops a yellow tint.

Verdict: Varnish has a better finish than mod podge.

Mod podge is thicker than varnish. The medium of mod podge is in paste form and that makes the finish thick. Also, mod podge has several ingredients and solvents in its formula making the paste more compound and thicker.

Varnish is not as thick as mod podge. You can even thin varnish if it’s too thick with mineral spirits or turpentine. Mod podge can’t be easily thinned as thinning the paste will ruin it.

The Level Of Protection

In terms of protection, varnish protects stains and wood better than mod podge. Varnish is designed to protect wood, while mod podge is designed to hold wood parts together.

Also, most varnishes have UV protection to prevent fading caused by the UV rays. Varnish also protects wood from scratches, dents, and friction. Mod podge doesn’t have all these features.

Mod podge is technically a glue, so it has more paint adhesion than varnish.

Varnish doesn’t have good adhesion qualities. To make varnish stick to wood, you must sand the surface first. However, mod podge will stick to every surface without sanding.

Mod podge is easier to apply. Since the paste has great adhesion, you don’t need to sand for it to stick, unlike varnish. As long as the surface is clean and without grease or oils, mod podge will stick.

You can apply mod podge with any flat instrument, while varnish will require a bristled paintbrush for its application. So mod podge is both easier and more convenient to apply.

Do You Need Varnish or Mod Podge?

If you still find it difficult to pick either the mod podge or varnish, here is a guide that can make the decision easier:

Pick Mod Podge if You Need a Multipurpose Item

If you are taking on a large arts and crafts project or you are renovating your home, mod podge will be a better pick as the paste can seal, glue, and even cover items. You’ll be able to do more with mod podge than with varnish.

Since varnish offers the best protection over an item, it’s your ideal pick to protect the wood, stains, and other items. Varnish also offers moisture and UV protection so your item or finish will be protected from the elements.

Pick Varnish for Outdoor Use

Since varnish offers moisture protection and UV protection, it’s more ideal for exterior use. If you apply regular mod podge outdoors, it will not last long. Though exterior mod podge will last longer outdoors, it won’t last as long as exterior varnish. So for outdoor use, the varnish is your pick.

Are You a Beginner?

If you are a beginner just starting your journey into the painting world, you want to go with mod podge. Mod podge is easier to apply and more forgiving so even when you make mistakes with mod podge, the mistakes wouldn’t show much. Varnish needs a certain level of experience to be applied and mistakes will be more evident when the varnish dries

Overall, varnish and mod podge are great items and they can both do just about the same thing. But for a proper finish, it’s best to use mod podge as a part of prep work for sticking wood together while varnish should be used as the final coat. 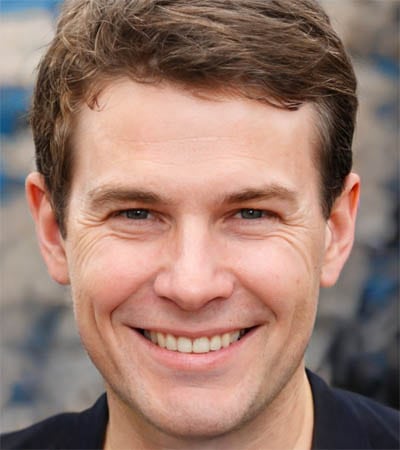