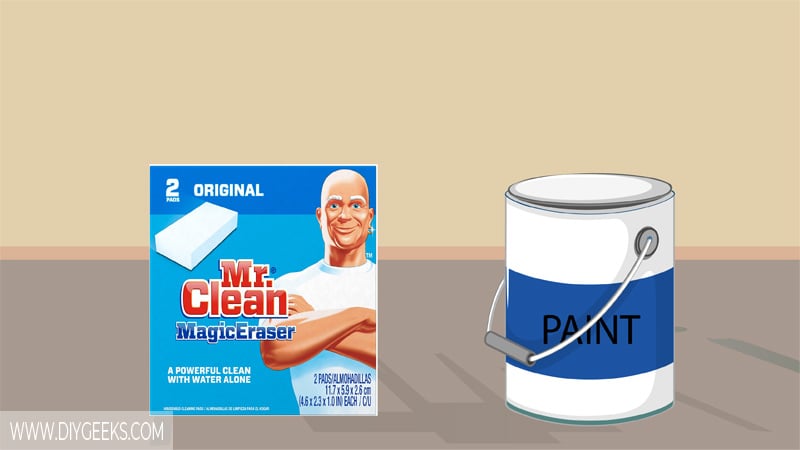 Magic eraser is a great product for removing stains and dirt from surfaces. But, does magic eraser remove paint?

Magic eraser can remove some types of paint, but the erasing pad isn’t designed for paint removal. Instead, it is designed to remove stains and grease from surfaces without ruining the material or surface.

This means it can remove dirt over the painted surface without affecting the finish underneath. However, magic eraser can remove fresh paint stains from wooden surfaces.

Using magic eraser over dried coating will clean and polish the coating, but it won’t remove it. To remove dried paint, you need a mild or strong solvent, such as rubbing alcohol, or petroleum-distilled solvents, such as mineral spirits.

A strong solvent will dissolve and separate particles, making the coating lose its solid form and liquefy. Once it loses its bond to the surface, you can wipe it off and remove it.

However, magic eraser isn’t strong enough to dissolve or separate particles. Magic eraser is made from melamine foam, which when combined with water can remove stains.

The eraser pad is made for household use, such as cleaning grease from kitchen cabinets or furniture. So, it is safe to use over the painted surface without removing the finish underneath.

How To Remove Paint With Magic Eraser?

You can use the erasing pad to remove fresh stains from a surface. Here’s how to do it:

1. Scrape the Paint off

First, wipe or scrape as much paint as possible off the surface. For fresh (wet) paints, use a rag. For dried paints, use a scraper to scrape them off. To scrape, position the tip of the scraper under the coating and lift it. This will scrape off some paint, but you must do this repeatedly.

2. Dip The Erasing Pad in Water

Since magic erasing pads are made from melamine foam, you must soak it in water to activate the cleaning agent.

3. Rub The Erasing Pad on The Surface

Rub the damp erasing pad against the surface. As you rub, the paint will come off. So, when the erasing pad foam gets soaked in paint particles, rinse or replace it. This prevents you from rubbing the paint into the surface again.

Here’s how to use it:

You can use a magic eraser to remove fresh paint from walls, but not dries coats. The erasing pad is designed to remove stains and dirt over the wall surface without removing the finish underneath. So, if you apply it over a dried coating, it will just clean it but won’t remove it.